Development and importance of Linderhof gardens and park

The Linderhof property with the former farm house,
St Anna's Chapel and the Royal Lodge with its first
extension wing, wood engraving, c.1871

King Ludwig II was fascinated by the mystical world of the Orient and the romantic medieval age of chivalry, but above all by the splendour of the Bourbon court. At Linderhof he set out to recreate the palace and gardens of Versailles, the magnificent former residence of the Sun King Louis XIV.

Linderhof, an agricultural estate belonging to the Schwaiganger military stud farm near Ettal, was known to Ludwig II from visits with his father King Maximilian II to the royal hunting lodge next to the Linderhof property. 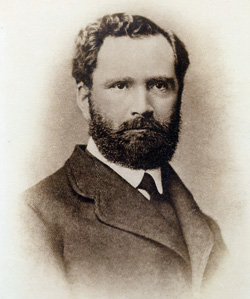 King Ludwig's garden designer, Court Garden Director Carl von Effner (1831-1884), came from an old family of court gardeners with a record of service to the Wittelsbach Court dating back to 1625. Promoted by Ludwig's father, King Maximilian II of Bavaria, Effner received comprehensive training which he completed in cities with famous gardens such as Vienna, Potsdam, Geneva and Paris.

With his talent for colourful, decorative and effective garden design, Carl von Effner satisfied Ludwig II's requirements to the full. For his services at Linderhof, the king rewarded his landscape gardener with a personal title in 1877.

Creation of the park

However, even the greatly reduced version of the Versailles park first designed by Carl von Effner in 1868 was too large to fit into this narrow valley (it was still around 1.2 kilometres long).

Plan of the Linderhof gardens and park by Carl Effner, c. 1874

When Linderhof was still at the planning stage, Ludwig II issued orders for his father's hunting lodge, also known as the "Königshäuschen" (Royal Lodge), to be renovated and extended to make it more comfortable to live in while building was in progress. The study and dining room, initially built in wood, were commenced in 1872, together with the first two garden sections, the present Eastern and Western Parterre. 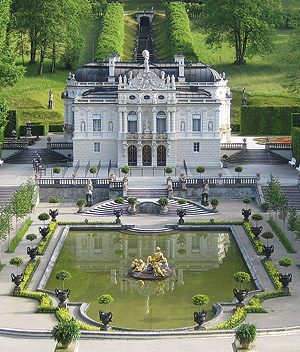 View of the main axis of the central complex

It was only when Ludwig II had acquired the island of Herrenwörth in the Chiemsee in 1873 and relocated the Versailles project here, that these provisional constructions were developed as the palace and garden complex we know today.

The wooden extension remained where it stood, was faced in stone and enlarged as the present palace. The king then ordered the "Königshäuschen", which now looked out of place, to be moved 300 metres to the west.

This also enabled the gardens to be extended. A large pool with a fountain around 25 metres high occupied the area in front of the Hall of Mirrors in the southern tract of the palace. The gardens continue on the south side in the form of three terrace gardens, crowned with a round temple and embellished in the romantic style with an existing lime tree around 300 years old, which the king saved from felling. 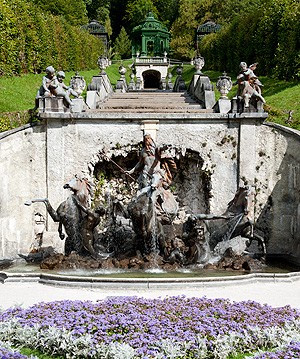 The sloping terrain facing the bedroom in the north tract of the new building was exploited to create a cascade. The water flows down the slope over 30 marble steps, each a miniature waterfall. With the Neptune Fountain at the bottom and the Music Pavilion at the top, the Cascade separates the palace from the countryside to the north.

A landscape park forms the transition between the ornamental gardens and the fir and beech forest of the Ammergau Mountains. The paths that wind through groups of splendid beech, oak and lime trees and across open meadows provide the visitor with constant scenic variety. In 1876, on the northern edge of the park, Ludwig II constructed two of his numerous little "refuges": the artificial Grotto, colourfully illuminated using the latest technology (the first dynamos made by Siemens-Schuckert) and the Moorish Kiosk. 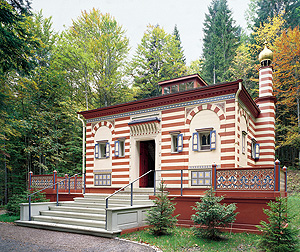 Moroccan House in the palace park

Hunding's Hut, the Moroccan House and the Hermitage of Gurnemanz have been reconstructed more recently. Ludwig II originally built these architectural features in 1876 and 1878 a few kilometres to the west of Linderhof in the middle of the Ammergau mountain forest.

The building of Linderhof

King Ludwig II naturally wanted the whole project finished as quickly as possible. In order to speed up the transport of building materials,  the technicians installed a special rollway, and there were sometimes as many as 180 people working on the Linderhof site. Even the growth of the park trees was accelerated by means of extra fertilization involving up to 100 cartloads of cow dung a year. The gardens and park of Linderhof were finally completed in the year 1880.

With the Baroque design of the parterres, the Renaissance-style terraces and the landscape park based on ideas from England, together with elements from historic gardens such as Marly le Roi in France or La Granja in Spain, Linderhof is one of the finest existing examples of the mixed style of garden.